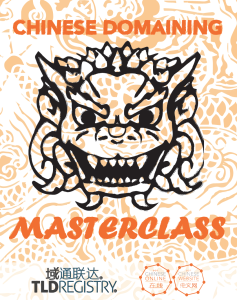 Welcome to the first installment of our Chinese Domaining Masterclass blog series, presented by TLD Registry!

In January 2015, we presented the world’s first, and still currently the world’s only Chinese Domaining Masterclass, at the industry-leading domain investing conference, NamesCon. After several months of research, development, writing, and refining, we created a 120-page curriculum for western domain investors to use as a resource to help them confidently invest in Chinese-specific domains, without knowing a single word of Chinese. Our presentations drew in hundreds of participants, and resulted in over 50 graduates, who took home a hard copy of the masterclass curriculum.

Now we are pleased to release portions of the acclaimed and sought-after masterclass curriculum to the general public, in the form of a blog series, which will be weekly blog posts focused on providing tips and tricks to help you invest in Chinese IDNs, again, without knowing anything about the Chinese language.

Let’s take a look at the number seven.

Seven is pronounced “qī,” which is close to 气 (qì, meaning “anger”). Given this meaning, we can extrapolate that the number seven in Chinese culture is slightly unlucky. China’s culture is oft known for achieving and maintaining harmony in several aspects of life, so the number seven isn’t particularly a number that you would want to use when referring to, or using it to represent harmonious synonyms, such as peace, tranquility, and confidence.

The most common sound-alikes for the number seven are “together” and “to eat.”

The verb sound-alikes for the number seven is:

The noun sound-alikes for seven is:

The adjective sound-alikes for seven is:

517: Pronounced “wu-yao-qi.” These syllables map easily to 我要吃 (wo-yao-chi or “I want to eat!”). McDonald’s Corporation was so enamored of this pun that it set up 400-517-517 as the company’s national toll-free home delivery service phone number. “517” has become so closely identified with McDonalds for this reason that a USA-based Google search for “400517517” displays the McDonald’s China website as the top result, and Baidu displays a wide menu to fast food ads for the same search!

We hope that this article on the number seven will help you to go forward in your IDN investment endeavors relating to numeric domains. Stay tuned for our article next week, which will focus on a different number!

We cannot load blog data at this time.